The WHOI Micromodem is a small-footprint, low-power acoustic modem based on the Analog Devices ADSP-BF548BBCZ-5A Blackfin DSP.

Use the links to the right to find hardware and software documentation, firmware updates, and installation tips. 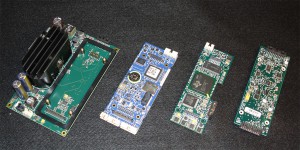 The Micromodem has been in development for over a decade. As a result, many supporting equipment designs have been created: transducers, shallow water enclosures, deep water enclosures, power amplifiers matched to most commercially available transducers, and accessory electronics. This equipment is documented and available for purchase. Much of that documentation is presented on this website. If you cannot find the information you need using the links to the right, please contact us, and we will be happy to assist you.

International Customers: Export restrictions allow us to only provide PSK hardware domestically at this time.

It is important to realize that there is a difference between packet burst rate and throughput, which is a function of many things, including serial traffic in and out of the modem and the time for the modem to decode the PSK data. These details are described below.

When referring to the FSK or PSK data rate we are talking about the burst rate. For example: A Rate 5 PSK packet has a Burst Rate of ~5000bps as that is the user content in bytes divided by the total time for the packet.

Total throughput depends on many other factors such as serial port speed (on each side of the communication system), travel time in the water, polling time, and processing time on the coprocessor (which varies between single channel and multi-channel operation) etc. We can provide throughput numbers for specific situations (x channels, x baud rate).

For a single channel receiver at rate 5, such as what would be used for a deep vehicle talking to the surface, the overall timing and rate are actually limited by the transmitter. The speed of the host computer sending data to the modem is what controls the overall throughput. The best-case throughput (with a host computer that can respond immediately to each data request), the time to transmit a packet is 4.9 seconds (and the receiver can process it in 4.6 seconds), so the data rate is 3343 bps.

For the multi-channel case at rate 5, such as what would be used in shallow water, the modem is no longer running in real-time because of the additional processing required to use the 4 channels. The time per packet and resulting continuous throughput is:

If the time for an ACK is added, then, depending upon the distance, the total cycle time grows to about 15.5 sec (for 1500 m range), and if the system is polled, then an additional cycle-init packet plus travel time is necessary, increasing this by another 2 seconds, for 17.5 minimum.

All measurements made assume the following hardware.

Some legacy systems with appropriate hardware revisions as shown above can be reconfigured to reduce power consumption to match the Standard Configuration shown below. Please contact us for additional information.

All systems delivered prior to January 1, 2018 are considered Standard Legacy Configurations.

All measurements made assume the following hardware and supply voltages less that 32VDC.

All measurements made assume the following hardware and supply voltages less that 18VDC.

As of January 1, 2018 the Micromodem does not have a low power acoustic wake circuit to allow it to remain listening while in a hibernate state. The usage case would be that Micromodem is hibernating and a remote Micromodem system could send an acoustic command to wake from hibernate. We have designs to facilitate this functionality and hope to implement it as development funds present themselves.

WHOI is the world's leading non-profit oceanographic research organization. Our mission is to explore and understand the ocean and to educate scientists, students, decision-makers, and the public.