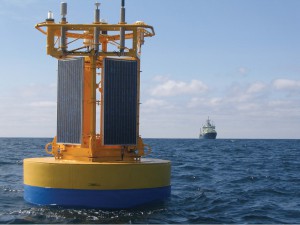 The Nootka buoy, which hosted an acoustic communications system to support an ocean bottom seismometer in 2400 m water offshore Vancouver Island. The buoy was deployed in 2004 for one year as part of an NSF program in wireless cabled observatories.

Some of our most important recent work has been done in the Arctic, both in the Fram Strait between Greenland and Svalbard, and in the Beaufort Sea north of Alaska. 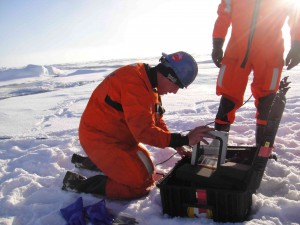 Peter Koski setting up a broadband acoustic recorder during a 2010 cruise to the Fram Strait aboard the Norwegian Coast Guard ice breaker KV Svalbard. 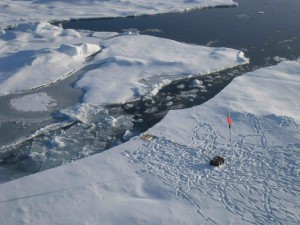 Acoustic recorder on an ice flow in the Fram Strait as part of the 2010 acoustic communications and navigation testing.

WHOI is the world's leading non-profit oceanographic research organization. Our mission is to explore and understand the ocean and to educate scientists, students, decision-makers, and the public.